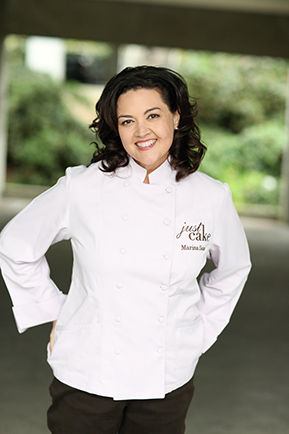 After successful careers in visual merchandising and the entertainment industry, a twist of fate brought Marina to the doorstep of an upscale cake design studio in Beverly Hills. There she discovered her passion and unique talent for designing cakes.  She had the rare opportunity to hone her skills while working with world-class event designers and celebrity clientele. She furthered her education at the world’s premier culinary college, Culinary Institute of America in Napa Valley, where she not only earned a degree in Baking & Pastry Arts, but graduated top of her class receiving the CIA’s Baking Achievement Award.

Knowing she wanted to start her own business, Marina returned home to the Central Coast and launched Just Cake in January of 2003. Marina quickly earned recognition for her impeccable style and unmatched quality of her cakes resulting in what many have described as the ultimate “cake experience”.

…As a Food Network champion & judge

Marina has been seen on The Food Network where she impressively clinched first place multiple times on Food Network’s “Challenge” series earning the distinction of “Food Network Challenge Champion” and the coveted red chef’s coat. She has also served as a judge for the series. 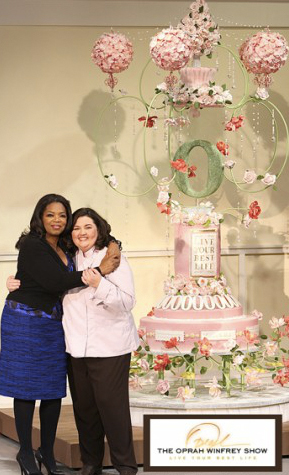 The Food Network has also featured her work on several specials. She was chosen to create the wedding cake for the winners of “Food Network Caters your Las Vegas Wedding” as well as create a showpiece cake for the first ever “Food Network Awards.” However, Marina’s favorite appearance was  “Fantasy Weddings” where she had the honor of making the wedding cake for her friends, Keegan Gerhard & Lisa Baily. Marina and her assistant, Dawn, battled to the end of the multi-week elimination series on The Food Network,”Last Cake Standing”. Despite the trials and tribulations they were the only team never in the bottom two throughout the series!  To date the current highlight of Marina’s cake career was as an invited guest on the “Oprah Winfrey” show, The Biggest Stars of Reality TV episode, representing The Food Network.

Marina brings a unique perspective to the art of designing cakes. Her background in theatre and fashion allow her to envision designs through an uncommon lens. Experimenting with structure and defying gravity are equally as intriguing to her as replicating intricate lace. Sugar art has proven to be the perfect medium for exploring all facets of the arts – for Marina,  the ideal merging of artistry and passion.

Ready to ignite your celebration with one of Marina’s extraordinary cakes?